Home » Blog » How Eye Exams Have Changed over the Years

How Eye Exams Have Changed over the Years 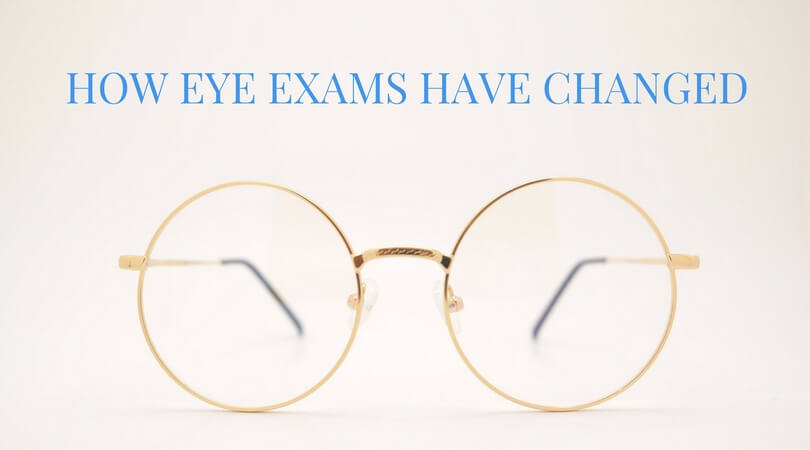 As early as 2000 BCE there were references to patients being afflicted with “diseases” of the eye which could be treated by physicians. The codes of Hammurabi enforced severe penalties, such as having their hands cut off, for doctors that performed operations which resulted in the loss of an eye. In those days, primitive blades and lances were used to treat perceived diseases and outdated methods such as incantations and primitive tools came often into play.

As with most processes in those ancient days, much was left to the hands of the gods. Incantations and primitive surgery were used to examine and treat eyes in ancient Babylon and Egypt.

The term “optometry” comes from the Greek words opsis (to view) and metron (measure or rule), so it literally means the measurement of vision. The science of vision goes back a couple thousands of years, with some early developments dating to 434 BCE and the early scientist Aristophanes.

A couple hundred years later, Euclid wrote in 280 BCE about the visual cone and the idea that light travels in straight lines. Around 150 CE, Ptolemy was able to measure angles of reflection and incidence between air and water. In the early centuries, great strides were made that would form the basis of modern optometry.

Alcmaeon, an early scientist and predecessor of Hippocrates, is credited with discovering the existence of the optic nerve. For the next 800 years, ophthalmology and optometry gradually advanced, as the study of human anatomy began in earnest. Though imperfect, these writings formed the basis of the science until the beginning of the 17th century!

By around 1000 CE, eyeglasses were being used to correct vision and may have been invented in China according to British scientist Sir Joseph Needham. They were first observed by Marco Polo during his travels.

By 1611, scientists Johannes Kepler and Christoph Scheiner were writing about how lenses, prisms and mirrors work. They also wrote about new optical observations, which included the principle of double aperture that is still used today. Furthering the science timeline of eyeglasses, Benjamin Franklin invented bifocal lenses in 1784.

By the 19th century, the understanding of the anatomy of the eye was finally beginning to be better understood, and in 1801 Thomas Young became the first to measure astigmatism. By 1827, George Biddel Airy had become the first person to use a lens for the correcting of the condition.

In 1918, a group called the Australian Optometrical Association offered up a syllabus for education and created a monthly publication to advance the practice. At this point, codes of conduct and behavior were established.

Visual acuity, or VA, is a term used to refer to how clear your vision is. It first came into play in 1843 with the work of Heinrich Kuechler in Germany. He created a standardized eye exam  test with three different charts. In 1854, Viennese oculist Eduard von Jaxtthal added to the advent of this chart by creating reading samples and altered fonts.

The first visual chart to truly standardize tests came about in 1862, and by 1888, Edmund Landolt introduced the current international standard for these tests. In 1984, the International Council of Ophthalmology took into account all of the historical developments to create a new 20/20 vision standard, which still exists today.

By the late 20th century, science had advanced to where it is today. The first lasers were used to correct vision in 1988, marking a major change in the science of Optometry. This procedure was approved for use in the U.S. in 1995. The science of what would eventually become LASIK was developed in 1990 in Europe and came to the U.S. in 1999. It is the most common elective corrective procedure.

If you live in New York, Buffalo or Niagara and need an eye exam, we’re eager to help. Give us a call today!