Home » Blog » How a Giraffe Opened My Eyes: A Raindrop® Testimonial

How a Giraffe Opened My Eyes: A Raindrop® Testimonial 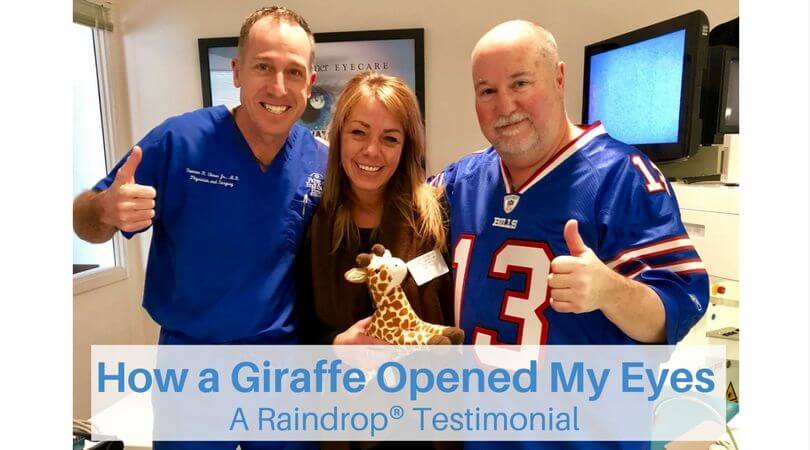 Choosing to undergo an elective procedure like Raindrop® Near Vision Inlay can take thoughtful consideration—but for Vanessa Miller, it was a no-brainer.

Vanessa Miller had been a patient of Dr. Elmer’s for only three months before she elected to undergo the Raindrop® Inlay procedure. “When I hit forty, I went to the eye doctor because my eyes weren’t working correctly and I thought something was wrong,” she says. It turns out, Vanessa was simply experiencing typical age-related vision changes. More specifically she was having difficulty focusing up close, a condition known as presbyopia.

She shares that she was not experiencing problems with seeing at a distance, but reading things up close was becoming increasingly difficult. “I’m not a person who carries glasses in my purse. I never have,” she says. Instead, she would squint at text and used an app on her phone to make reading documents easier. “It was embarrassing to have to use an app to read things when I was with clients. When I wore glasses, it felt like it was just on, off, on, off—when I looked up, I could see great, but couldn’t see distances with the glasses on. It got to the point where it was an inconvenience all the way around.”

Searching for an Answer

Vanessa was waiting for a technology to be developed that would fix her near vision. Little did she know, it already existed.

One day, she came across a social media post from Kevin O’Brien, a certified ophthalmic surgical technician with Fichte Endl & Elmer Eyecare, that mentioned the benefits of the Raindrop® Near Vision Inlay. Vanessa did some research on her own before calling and talking to Kevin about the procedure.

“I was a little concerned about whether I would qualify for Raindrop® because my father and sister have both experienced macular degeneration,” she shares. “So, I thought ‘Oh, shoot. I might get knocked out of this.’ But I went in for the exam anyway.”

On the day of Vanessa’s Raindrop Evaluation appointment, she sat in a regular room during the exam. It was a busy day in the office, so Angelica, the Raindrop® Surgery Coordinator, walked Vanessa to an overflow area in the pediatric wing to wait for her results. Angelica told her she would be back shortly with Dr. Elmer to share the results, but Vanessa replied that she already knew she had qualified.

“Angelica asked me, ‘How do you know you qualified?’ and I replied, ‘There’s a giraffe in here.’ ” 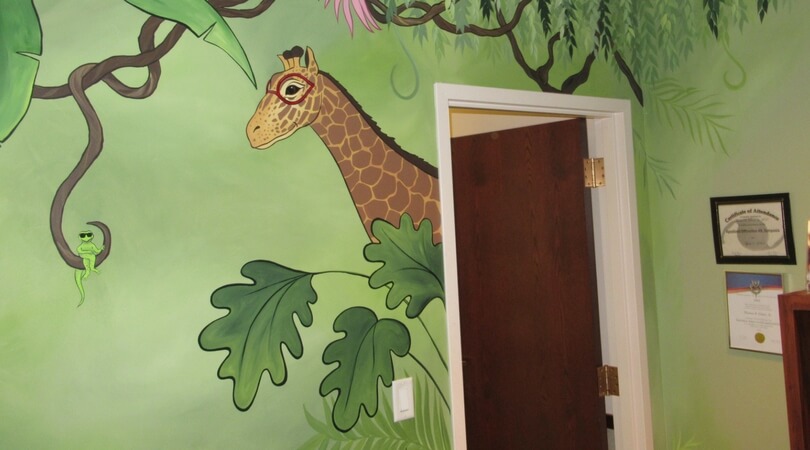 While our mural of a giraffe wearing eyeglasses may be amusing for most, Vanessa had a deeper connection to the painting. The friendly giraffe was a comforting reminder of her daughter, Samantha.

Vanessa had the joy of attending her daughter’s wedding on December 26, 2016, but sixteen days later, Samantha passed away unexpectedly. Vanessa was heartbroken.

Beginning in middle school, Samantha’s favorite animal was a giraffe. “In her home, her bathroom was all giraffes,” Vanessa shares. “She was a teacher and in her classroom, the kids knew she loved giraffes. So, every time there was a celebration, she would get about ten giraffes because the kids would find them and bring them to her.” Samantha even put a photo of a giraffe on her credit card.

When Samantha passed away, people remembered her love of giraffes and Vanessa started receiving gifts. Vanessa laughs as she says, “The giraffes have been coming into my home constantly and people tell me that because of her tragic story, whenever they see a giraffe, they think of her.”

Vanessa even has a tattoo of a giraffe on her shoulder with Samantha’s signature and a giraffe is etched onto Samantha’s monument. “It’s very close to me,” Vanessa shares.

The Giraffe Opened Her Eyes

As soon as Vanessa saw the giraffe mural on the day of her evaluation, she knew she had to do the procedure. “It was like that ‘ah-ha’ moment for me that I was meant to do it,” she says. Vanessa had spoken with Samantha several times in the past about wanting to fix her vision. “It was not something that was unknown to her.”

At Fichte Endl & Elmer Eyecare, we offer to let Raindrop® patients hold a stuffed dog or bear that we provide during the procedure to calm anxieties and reduce stress. Vanessa had a better idea. “I thought, ‘I’m not settling for a teddy bear. I’m bringing my own,’ ” Vanessa says.

On the day of the procedure, Vanessa walked in with one of Samantha’s giraffes and hugged it tightly. With the giraffe in hand and her Fichte Endl & Elmer Eyecare team by her side, Vanessa felt comfortable and safe throughout the operation.

“Everyone was talking to me and Kevin was my cheerleader,” she shares. “He would say ‘You’ve got this’ and count me down to things. They kept me abreast of what was happening and were really good at telling me before something happened so I was able to predict it. I wasn’t scared at any point.”

“It went by in the blink of an eye, no pun intended.”

Vanessa was surprised that following her Raindrop® procedure, she didn’t feel any major discomfort in her eye. She equated the sensation to feeling like she had an eyelash stuck in her eye. “It was nothing major,” she says. 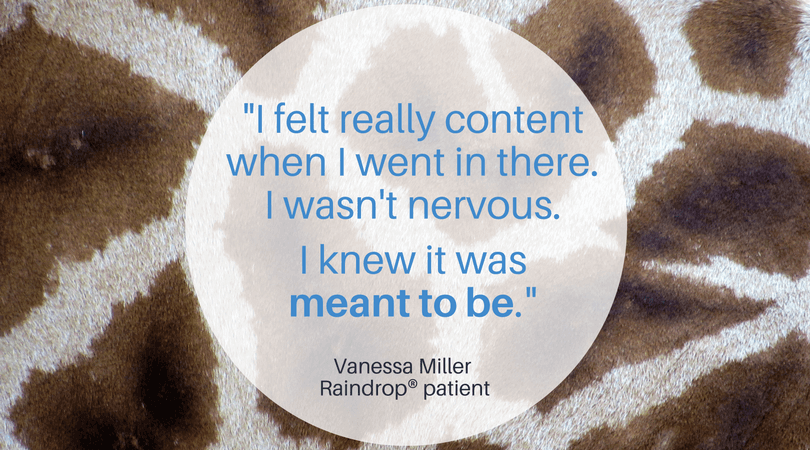 After a Raindrop® procedure, patients are scheduled to return for follow-up appointments one day and one week post-operation.

To celebrate her new vision and thank the team at her first follow-up appointment, Vanessa brought specially-made giraffe pencils for the Fichte Endl & Elmer Eyecare staff. After Samantha passed away, Vanessa made giraffe pencils for Samantha’s students. The pencils are heat sensitive, adding spots when a child holds them. “No two giraffes are alike,” she shares. “I told the kids to use their Magic Giraffe Pencils to make their own giraffes.”

The staff loved their new Magic Giraffe Pencils. Even Dr. Elmer’s six-year-old son, Trey, was able to take one home.

Just one day after the procedure, Vanessa told Dr. Elmer that she was able to read text on her cellphone without using her app or wearing reading glasses. During that appointment, she learned she was able to see closer to 20/20 on the near vision chart.

“What’s interesting is my vision is still evolving,” Vanessa says. “It’s getting better every day.”

Are you ready for Raindrop® to open your eyes? With the Raindrop® Near Vision Inlay, your near vision can be restored. Read our patient guide to further understand the candidate qualifications, outcome statistics, and more.

NOTICE:  As of January 30, 2018, Revision Optics, the manufacturer of the Raindrop® Near Vision Inlay, will no longer be in business and will not be distributing the inlay. Fichte Endl & Elmer Eyecare encourages you to review our other services and procedures to see if there is another solution available to fit your needs.

Ready to take the next step? Contact our staff for more information on our presbyopia solutions.