3 Ways Screens Can Harm Your Vision 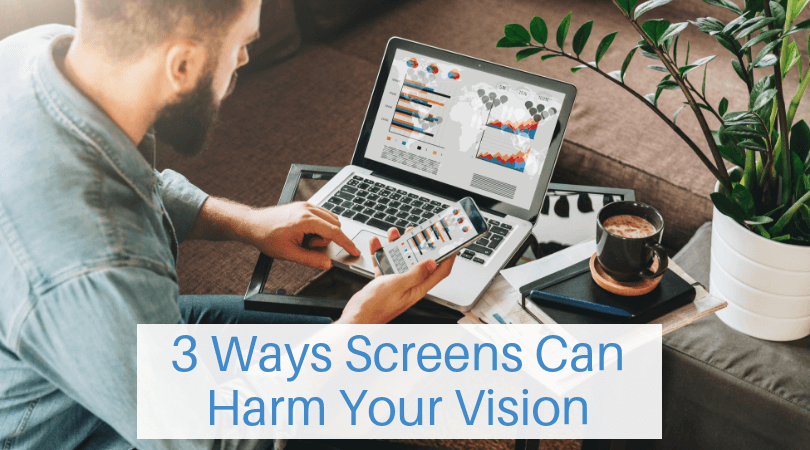 How many hours do you think you spend looking at screens every day? From working on computers to scrolling through social media on your phone and watching television, you probably spend a lot more time than you’d think looking at screens. According to Statista, American adults spend an average of three hours and 54 minutes watching television, three hours on mobile devices, and two hours and three minutes on laptop or desktop accessories daily.

Too much screen time can cause dry eye, headaches, blurry vision, light sensitivity, and tired eyes. These symptoms tend to pop up after screen use for a minimum of two hours at a time – a time frame commonly over-extended by adults. But what makes screens dangerous for your vision?

Blue light is a short-wavelength, high-energy light commonly emitted by digital screens. Light that looks white, like what we see on many digital readers or documents, is made of large amounts of blue light. In addition to sunlight, people are exposed to blue light through compact fluorescent light (CFL) bulbs, fluorescent light, LED light, tablet screens, smartphone screens, and computer monitors. While the sun emits the largest amounts of blue light, you can still be exposed to high amounts if you spend much of your day on digital devices. Kids are at risk too. A recent study funded by the NEI showed that children regularly using digital screens can absorb more blue light through their eyes than adults.

Do your eyes feel dry by the end of the workday? You probably aren’t blinking enough. When focused on a screen, a person’s rate of blinking can decrease by up to half of their normal rate, which is typically around 15-20 blinks per minute.

Many people put their computer monitors, televisions, or e-readers at eye level. While this can benefit posture, it causes your eyes to be more open than if you were looking down to read a book. When you look straight ahead, your eyelid doesn’t cover as much of your eye – exposing it to dry air.

The next time you read an article on your phone, pay attention to where you’re holding the device. A study conducted in 2011 found that adults hold their smartphones approximately 12 ½ inches away from their face to read a webpage and at a distance of 14 inches for text messages. It can be difficult for eyes to see things at close distances. As you hold your devices closer and closer to your face, you’re making your eyes work harder, which can lead to fatigue and eye strain.

What Can I Do to Prevent Digital Eye Strain?

You can take many steps to prevent or alleviate digital eye strain.
• Lower the screen brightness
• Magnify text sizes
• Invert display colors
• Sit or stand an arm’s distance away (approximately 18 to 24 inches) from computers during use
• Lessen screen glares by reducing overhead lighting
• Take a 20-second break every 20 minutes to look at something 20 feet away when doing up-close or digital activities (reading a book, working on a computer, watching television, etc.)
• Remember to blink while looking at screens
• Invest in eyeglasses with anti-reflective lenses
• Wear blue-light filtering lenses

In most cases, treating symptoms by altering screen-use habits, taking regular breaks, or using over-the-counter eye drops is enough to alleviate eye strain and fatigue caused by digital devices. If you’re still experiencing difficulty seeing or have dry eyes after using eye drops five to six times per day, schedule an appointment with your doctor. Contact our office in Buffalo to schedule your consultation today.